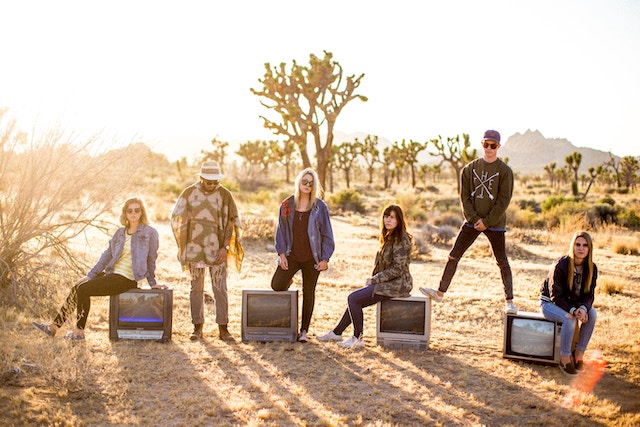 One of the issues with being an “early adopter” of radical lifestyle choices like digital minimalism is that you spend a lot of time looking foolish. Then, at some point, people suddenly realize you’re onto something.

For example, my family became vegan when I was about five. (Long story, but it all started when my mom got a job at a Winn-Dixie deli.) That was in the 90’s, when the only people shopping at health food stores wore tie-dye and worshipped the earth goddess. Then there was us, the family of four with a dog and a white picket fence. Normal people called us “weed eaters” and told we would die of protein deficiency.

Fast forward to my Millennial young adult life. Now, being vegan is almost as cool as being gluten-free, or paleo, or keto. People started realizing there are health risks involved in a standard American diet. Research figured out that cutting back on meat is good for the environment and good for your health. All of a sudden, early adopters are a teensy bit vindicated.

When it comes to digital minimalism, I was also an early adopter, although this time it was of my own accord, not from my parents’ lifestyle choices. Ten years ago, in late 2009, I moved out of my parent’s house and I didn’t buy a television. In my pursuit of a truly meaningful life, a television just didn’t fit into my priorities. Here’s a look back on a decade of owning no TV.

What Happens If You Get Rid of Your Television?

You might wonder if people thought I was foolish. Of course! People wondered why I had never seen The Avengers, The Dark Knight, Hunger Games, or any of the Harry Potter movies.

Then, to top it off, I used my computer and smartphone as tools instead of gaming devices. I proceeded to slip untouched through the ultra-popular phase of Angry Birds, Minecraft, The Sims, and Farmville. (Although I confess to getting caught for a while by Candy Crush.)

Sure, I streamed some movies, but once I counted up what I had watched since 2009, it totaled to about 20 minutes per week over a ten-year period. It was like being on the outside looking in. For ten years I kept up this lifestyle as I devoted myself to the pursuits that mattered most to me.

Is Digital Minimalism Even a Good Idea?

Then, wonder of wonders, I started seeing TED talks and books coming out, using science to confirm that my weird, unconventional path actually has some real benefits for the brain. People started getting worried about their codependency with their smartphones and their media addictions. In one TED talk, Manoush Zomorodi joked that “the only people who refer to their customers as ‘users’ are drug dealers and technologists.”

This last decade has seen a growth of projects, apps, and courses aimed at helping individuals cut down or at least monitor their screen time. There’s a segment of the population that is awakening to the realization that if we do not define our relationship to technology, attention engineers will define that relationship for us – in their favor.

As I look back over the last decade, I realized something. As an early adopter, I’ve had an opportunity to experience digital minimalism much longer than most people. I certainly can sympathize with efforts to renegotiate digital technology as a part of life, and I’d like to speak to that struggle.

First of all, something I learned over these last ten years is that meaningful lifestyle choices sometimes look drastic. In 2009, I wanted to clear my mind of distractions so I could focus on what was most important. I remember breaking CD’s into a trash bin.

I didn’t want the temptation to crank up music every time a quiet moment came around. I’ve used apps, deleted them, used again, deleted again – sometimes the journey of a digital minimalist is more like a relapsing drug user.

And that’s ok. Once you’ve defined your goals (and nobody can define your technology goals for you) it’s ok to break, toss, donate, delete. Do whatever it takes to reach those goals. Expect to fail sometimes. But I imagine you didn’t declutter your entire house in a day, right? Becoming a minimalist on any front takes time and effort.

The second thing I want to speak to is the necessity of replacements. There is a subtle difference between downsizing your home and downsizing your entertainment library. When you declutter your house, you end up with free, empty, beautiful space, and everybody’s happy. When you declutter your apps, movies, games, and devices, you can easily be left with mental boredom.

Especially if you’re moving towards digital minimalism as a family, I think it’s responsible to make sure you have healthy replacements for the Xbox. Plan family outings, read books together, build a tree fort, buy a canoe. Digital minimalism shouldn’t feel like a restriction, it should feel like an awakening. Movies, games, and apps are so easy…but ten years from now, your child or spouse won’t remember the movies you watched together. They’ll remember the moments you really lived together.

Customize Your Digital Minimalism Experience to Fit YOU

My third point is merely a word of encouragement to let you know that digital minimalism does not make you socially incapable of navigating the world. Sometimes we get this idea that technology in all its forms is a necessary evil. We think we need it to be able to operate in modern society. Those who eschew it, we imagine, are people like the Amish, or religious fundamentals, or preppers living deep in the wilderness. So, we hang onto the whole package, convinced that we need it for survival in the modern world.

I challenge that perception.

This “package” can be picked apart, piece by piece. We can choose some items and reject others. We can limit and redefine. And believe it or not, there are very few elements in today’s digital world that you can’t live without. An email address, a phone number, a bank account. I haven’t pared down that far, but let’s just be honest: to say we can’t live without an Instagram account is perception, not fact.

I’ve been doing this for ten years, and I can assure you, I don’t have any problems navigating modern society.

I travel with my brand-new MacBook Air (in gold, because I thought it was pretty).

If I want to know something, I open my browser and look it up.

I communicate with my relatives and friends via Telegram and WhatsApp.

I write on my own blog and even tried my hand as a YouTuber before deciding it wasn’t my craft. Everything I do in my relationship to technology puts me as an active, not passive, user.

We don’t have to become haters of digital technology. We just need to stop viewing it as a complete package and start being proactive about which parts we want.

To conclude, I want to encourage you if you’re starting the new decade with plans to reevaluate your relationship with your devices. If the last decade has taught me anything, it’s that life is too important to spend it glued to a screen. Millennials spend approximately one-sixth of every day watching television. Do I really want to grow up into a white-haired old lady and admit that I spent one-sixth of my life watching other people live their lives, lives that in a great majority of cases are purely fictional?

As a digital minimalist, I’ve awoken to the real world, and that’s where I plan to stay in 2020 and beyond.

What are your digital resolutions for 2020? Let me know in the comments below!

7 Guiding Questions to Ask Yourself in Quarter-Life Crisis

How to Find Meaning in Life: The Complete Guide for 2020

Overwhelmed by Your Phone? A Digital Minimalist Shares Her Surprising Phone Habits