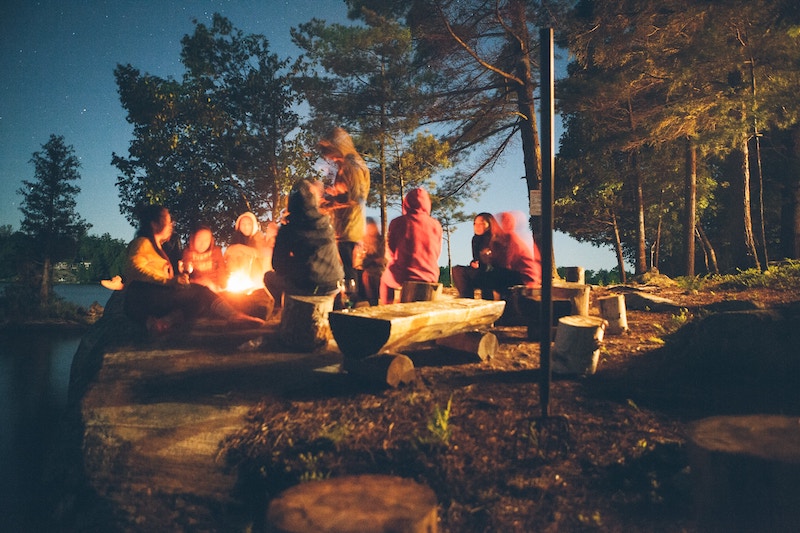 Do you find yourself feeling lonely more often than not? Has your “quiet night in” turned into chronic loneliness?

Do you struggle to deal with emotions, wondering why you just can’t “get over it?”

I’m studying cultural anthropology at the PhD level, and I’ve lived abroad for the last six years. Let me tell you a little secret. The issues we’re all dealing with — loneliness, chronic dissatisfaction, overwhelm — are directly related to cultural extremes. Extremes that no one wants to talk about.

Let’s take a moment and just make some cultural comparisons, and then you tell me: why can’t you get over your chronic loneliness?

Hyper-Individualism: When Each Man Becomes an Island

In another post, I talked about the problems of America’s hyper-individualistic society. To summarize it here, we have to divide all human cultures in one of two categories:

All the cultures from the Americas, Africa, Asia, Europe, down under, and even the far reaches of Siberia and Alaska would need to be categorized in one box or the other. How do you know where your culture fits? We could start by asking these diagnostic questions:

You might feel like individualism is a very normal way of life. After all, you grew up like that. You’ve never known anything different. You’re American, living in the “land of the free.”

How could personal freedom contribute to chronic loneliness?

Let me give you a case study that shows this is not the only way of organizing life.

For the last six years, I’ve lived in Beirut, Lebanon. It’s a bustling city on the Mediterranean seaside, just a few hours north of Israel. Lebanon is the land of the ancient Phoenicians — the boat makers who invented the world’s first alphabet. It’s a land of olive trees and cedars, crowded cities and quiet villages, and everywhere a buzzing undercurrent of…relationships.

And there’s something about the way those relationships work that can help us see how extreme our culture has become.

In Lebanon, children live with their parents until they get married. Period. It’s unthinkable to push your child out of the home when they turn 18. Life is too harsh, too dangerous. Mothers do their child’s laundry and cook their food and wait up until they come home at midnight, even when their child is 30 years old. And they wouldn’t have it any other way.

In Lebanon, relationships are so important that you’re a fish out of water if you have no meaningful connections. Anything you do involves navigating a complex social web: renting a house, getting your residency visa, even getting decent prices for goods. There’s a word to describe it: wasta. If you have wasta, it means you have the necessary social capital to get done what you need to get done. (Thus, the more important people you know, the more wasta you have.)

Social conversations, therefore, revolve around who you know and what kind of relationship you have with them. People want to know you, but more importantly, they want to know who you know. I heard of one Korean student in Lebanon who used to say that his father was the Korean ambassador. Apparently this helped him get exclusive access to certain places!

In Lebanon, you simply don’t exist if you aren’t enmeshed in a web of human connections. You are paralyzed. You can do nothing. No one will take you seriously, or marry you, or give you a job, if you don’t have meaningful connections. Lebanese professor Suad Joseph, in his book Intimate Selving in Arab Families wrote,

The self is not sealed within boundaries separating self from others. To be whole is to be part of, related, connected. To be pervious to others, to invite the engagement of others, to embrace the self in the other and the other in the self — these are the signs of maturity [in Lebanese culture]. Relationships may change, break, mend…One’s self is always “in relationship to.”

How They Handle Emotional Regulation

A great deal of Western psychology is based on the idea of individualism. For example, “codependency” is bad. Cognitive behavioral therapy (CBT) is supposed to help you manage your emotions alone. Numerous self-help books claim to help you deal with your own problems. All. By. Yourself.

For example, I once met a really nice Lebanese girl my age, the daughter of a general. We met up a few times to get a bite to eat and chat. One day, she met me crying because of a crisis in her university life. As a good, considerate American, I listened to her crisis and then gave her space and time to feel better. I thought to myself, she’s having a tough time. I won’t invite her out again for a little while, because I don’t want to burden her with socializing.

Let’s just say that this friendship didn’t stand the test of time. I didn’t realize that a good Lebanese friend will call multiple times in the same day until they are sure that the other person’s emotional issue is solved.

In my early years of living in Lebanon (during which I made many mistakes) I also lost a very close friendship because I didn’t show up at important moments. I thought I was giving them space. They thought I didn’t care.

The reality is that hyper-individualism has sold us the myth that emotional maturity means we should deal with our emotions alone. However, let’s not forget that ideas of emotional maturity or emotional intelligence are culturally constructed. In some parts of the world, being a loner is considered immature and undesirable.

The way Lebanese people self-identify tells us a lot about their deeply-held assumptions about the interconnectedness of life.

When I first arrived in Lebanon back in 2013, I remember strolling through the mall, watching parents interacting with their energetic young children. Children would call out, “Mama! Baba!” and the parents would answer back using the same name. They wouldn’t call their little girl “Maryam! Layla! Eliana!” No. The mother would call her little girl, “Mama.” The father would call his own child “Baba.”

It was as if the parents saw their children as extensions of themselves. The child did not have a separate identity from the mother or father.

Contrast this to the way American parents complain heartily about having teenagers in the house. How many times have you heard parents eagerly wishing for the day when their kids will “fly the coop” and become financially independent? This is based on deeply held assumptions that children are independent beings. Again, this is a social construct, not an absolute.

And although some young adults are more than ready to “cut the apron strings” at age 18, not everyone is. Nevertheless, our hyper-individualistic culture forces everyone to get out of their parent’s house, regardless of how ready they are.

How They Experience Romance and Love

Another area of contrast between group-focused and individual-focused culture is the way we handle romance and love. In American culture, there is a tendency to place HUGE expectations on the romantic relationship.

In other words, Mr. Right or Mrs. Right is expected to fulfill the whole gamut of your emotional needs.

Because our society has created these expectations. Think about it: you’re not allowed to be dependent on your parents or extended family. Friends come and go. There’s only ONE legitimate place where it is socially acceptable to have long-term interdependency and love: the romantic relationship.

No wonder we overload our romantic partner with expectations that he/she will fulfill all our emotional needs. No wonder people are fleeing posthaste from relationships that “smother” or “suffocate” them. And what happens? We end up back at square one, lonely and alone.

Interestingly, in Lebanese culture, I have observed that the extended network of relational connections can decrease the overwhelm of any one person. There are far less psychologists here than in the US; the people talk their problems out, a dozen times, to a dozen people who are close to them. Why pay for a therapist? Why burden just your romantic partner when you have multiple close relatives and friends who are ready to support you?

Marriages in Lebanese culture also reflect the reality that married persons remain connected to large webs of family relationships. The married woman does not change her last name, and if there is a divorce, she generally returns to her parent’s home. Marriage is highly desirable, but it is experienced within the context of a huge safety net of other permanent relationships.

Put bluntly, group-focused cultures share money much more freely than Americans do. Because everything is based on fostering close relationships, giving a loan to a friend or sharing money with a family member is often viewed desirably (unless, of course, we’re talking about a chronic mooch).

Group-focused cultures operate on the adage, “I scratch your back, you scratch mine.” Mutual interdependence is the goal of passing around money, favors, and jobs. There’s a sense of security in knowing that you’ve helped dozens of people in meaningful ways that they can never forget. If you ever find yourself between a rock and a hard place, you won’t even have to ask for help. Help will just come.

For this reason, Lebanese people don’t view their personal finances as entirely personal. There’s usually quite a bit of sharing with parents, siblings, and extended family. One Lebanese dentist I know is married and has children but sends her entire paycheck home to her parents every month. I know a college student that worked hard all summer and put her earnings towards her sister’s tuition. Friends borrow money in the hundreds or thousands, and there’s no contract signed.

This, of course, often produces challenges. I won’t say there aren’t any challenges with the group-focused model. But there’s one thing for sure: no one ever feels like they have to make it alone.

The truth about why you continue to struggle with chronic loneliness is that there are some unhealthy extremes in Western society. I’ve painted Lebanese culture in broad strokes (to any Lebanese reader, forgive me if I have overgeneralized for the sake of simplicity). Certainly, Lebanese culture has its issues — but their culture can definitely teach us a lesson about just how far our hyper-individualism has taken us.

Want to know for sure? Ask yourself the following questions:

Perhaps the reason you can’t get over your chronic loneliness is because human beings simply aren’t made to operate in such an each-man-for-himself model. Research has demonstrated the damages to the human psyche that come from even short periods of solitary confinement. Although physical isolation and feelings of loneliness are not the same thing, it doesn’t take a rocket scientist to see the overlap.

What’s the answer? Don’t view your chronic loneliness as a personal problem. View it as a systemic problem. And try to find a way to break the system.

How can you subvert rising hyper-individualism and chronic loneliness? 💪 Leave me your ideas in the comments below!

All the best on your journey,

If You Have These 3 Characteristics, You Probably Shouldn’t Be a World Traveler

An Intentional Thanksgiving: The Holidays We Make and the Holidays That Make Us